On 2nd October 2006 a most amazing event took place at the Austrian Parliament. Rechtskomitee LAMBDA (RKL), Austria's lgbt civil rights organisation, celebrated its 15th anniversary with a unique ceremonial act in the Federal Parliament of the Republic of Austria. It was the first time in history worldwide that an lgbt-organisation was honoured in a national parliament. 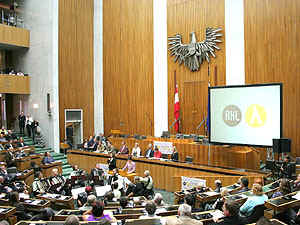 Over 400 people registered, so the event was even moved to the actual chamber (the session hall) of the lower house of federal Parliament (the Nationalrat). The Federal President (head of state) of Austria sent video greetings as did the head of Austrian police forces. The Minister of Justice and the UN Special Rapporteur on Torture spoke as well as the president of Austria's Judges Association, Austria's Secretary General of Amnesty International, MPs and representatives of the Bar Association. So this was the equivalent of celebrating the 25th anniversary of Stonewall in the chamber of the House of Commons, with the Lord Chancellor as one of the speakers, and video greetings from Queen Elizabeth 2d.

Lectures pleading for same-sex marriage have been held by RKL-president Helmut Graupner, who received standing ovations by the over 500 people audience in the chamber, by Hans Ytterberg, Swedish Government's Ombudsman against Discriminatioh on the Ground of Sexual Orientation, and Robert Wintemute, the world's foremost expert on sexual orientation law.

The Ceremonial Act finally culminated in the outstanding key-note lecture of Hon. Justice Edwin Cameron from the Supreme Court of Appeals of the Republic of South Africa. Hon. Justice Michael Kirby of the High Court of Australia regretted not having been able to come personally and sent a greeting message which has been read out.

The reception was held in the stunning Parthenon-like main hall of the Parliament.

Several Austrian MPs and Supreme Court as well as Administrative High Court judges and other high ranking representatives from the judiciary were in the audience. The event has been moderated by The Hon. Justice Lilian Hofmeister of the Constitutional Court.

The Ceremonial Act was sponsored and opened by Barbara Prammer, (then vice-president and now) president of the Nationalrat, who is also a member of RKL's board of advisors. As is (after the elections of 1st October) the designated Prime Minister of Austria (Mr. Alfred Gusenbauer).